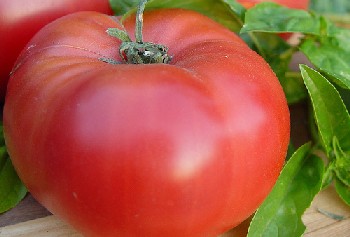 The brandywine tomato (left) is probably the most famous of the heirloom tomatoes; known for its succulence and remarkable flavor.

Just what are heirloom vegetables?

They are plants grown from seeds that have been propagated in small farms and backyard gardens over the decades; saved and passed down from one family or group of people to the next generation. Hence the name heirloom.

Heirloom veggies have recently become very trendy and popular by home gardeners as they experiment with these interesting and delicious strains of crops. By the way, heirloom seeds are all open pollinated, as hybrid seeds cannot be saved.

Sadly, many prized species of vegetables have been lost forever, as over the decades, fewer people saved seed. Just like an extinct animal, they can never be resurrected.

So growing heirlooms and saving the seeds to pass on is a very noble and worthwhile project which helps preserve our heritage!

Why else should you grow heirloom vegetables? They usually have superior taste and tenderness.

DISADVANTAGES
The downside is, growing heirlooms can be quite a challenge. Because they are not bred for commercial use, they usually lack disease resistance, are more fragile, bruise easily, and do not keep very long. Heirloom tomato strains are prone to misshapen fruit, cracking and catfacing.

But if you like a challenge, and are willing to watch them carefully, grow some heirloom seeds, the reward for your trouble is superior taste!

Check around at garden supply centers, as more and more heirloom seeds are popping up on the shelves.

The Mortgage Lifter heirloom tomato was developed in the 1930's in West Virginia by "Radiator Charlie" Byles. Without any experience in breeding, he developed this tasty strain which was so popular, he sold seedlings for $1 apiece, and was able to pay off his $6,000 mortgage in only six years!

Other popular heirloom strains are noted below. You might notice that some of them have been offered by major seed suppliers for years.

This fascinating website offers a great selection of heirloom seeds, well packaged to last for years:

Once you have grown some heirloom tomatoes, make sure to dry out some seed from each crop (for sharing and saving). Here's how:

1. Pick a couple of big, fully ripe tomatoes, cut them open and scrape the seeds out.

2. Place the seed and attached pulp in a jar, add some warm water, cover and shake well. Drain the water, being careful to hold back the seeds. Refill with warm water. Add a spoonful of baking soda, close and give it a good hard shaking.

3. Place the jar in a cool dark place for a day.

Thoroughly dried tomato seeds can last up to 5 years when prepared and stored this way.

Have your say about what you just read! Leave me a comment in the box below.