Jerry Brunetti of Agri-Dynamics has been one of those proponents, noting that sprouting removes much of the grain starch that can lead to overly acidic conditions in the rumen. Brunetti also points to research indicating that sprouted barley has higher levels of many vitamins, minerals, and sugars and that these are in highly digestible forms within the sprouted feed.

Another proponent of hydroponic fodder, NY organic dairy farmer John Stoltzfus, noted that butterfat levels in milk have risen with the sprouts, and declined when he stopped feeding them. He also claimed a significant increase in milk production and is excited about a planned expansion of his sprouting room.

Click here to read about our FodderPro Hydroponic Feed Systems 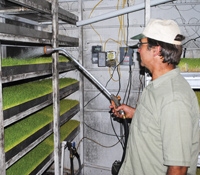 Conclusion: Hydroponic fodder systems make the most sense for organic and/or grass-fed livestock operations, smaller family farms, “hobby operations” and horse stables. It can be a major feeding option when pastureland and/or hay are in short supply or adds a highly nutritious and relished supplement to traditional grazing.

(Although products such as barley seed technically are grain, when sprouted grains are fed to cattle, they qualify as “Grassfed Beef” by the American Grassfed Association.) 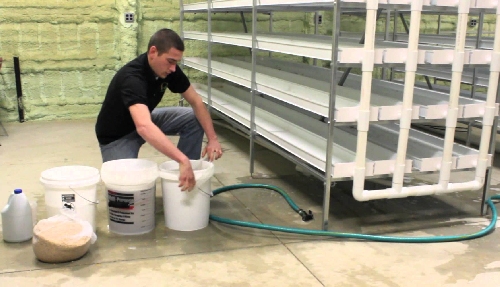 Conclusion: Hydroponic fodder systems do not appear to be an economically feasible option for large-scale livestock farms which already have plenty of consistently productive pasture and access to high quality, reasonably priced hay

For a scientific take on the use of hydroponic fodder for livestock food, you may want to peruse these scientific studies: